Dec. 2014 - March 2016 - The digitization of the Rivonia trial dictabelts with the Archeophone phonograph

The voice of those who were believed to be speechless

Also available to download, Henri CHAMOUX : Digitizing the Rivonia trial dictabelts with the Archeophone phonograph, pdf of the slideshow presented at the conference Listening to the Rivonia Trial: Courts, Archives and Liberation Movements, Johannesburg - University of the Witwatersrand, 27 September 2018.

A singular figure among the last cylinders used for sound carriers, the dictabelt is a thin floppy cylinder made of vinyl, red, blue or purple in color stretched between two rollers and set in rotation in a dictaphone machine. Also called tank tread or memobelt, the dictabelt was of common use in the USA for the most part, but also in other countries from 1947 to the late 1970s. A versatile cylinder during the Cold War, it had a few well-known applications, such as the recording of telephone conversations of President Kennedy, the integral dictation of a novel by writer Agatha Christie when she was too old to write by hand, or the recording of the Rivonia trial (1963-1964). This trial is a landmark in South Africa’s fight for freedom: It was a trial in which Nelson Mandela together with Walter Sisulu, Govan Mbeki, Raymond Mhlaba, Elias Motsoaledi, Denis Goldberg, Andrew Mlangeni and Ahmed Kathrada were accused of trying to overthrow the state and ended in all the above being sentenced to life inprisonment. During the trial, no discussions were taken down on paper. Instead, the proceedings were recorded on 591 dictabelts. In December 2006 these were inscribed on UNESCO's Memory of the World register. These precious documents were loaned to the Ina (Institut national de l'audiovisuel) in October 2014 by the National Archives of South Africa (NARSSA) where they will be returned soon.

I am a French civil servant working for the Rhône-Alpes Historical Research Unit (LARHRA, a joint research unit of the CNRS). I am also the inventor of the «Archéophone» phonograph (1998) and it is with this device that I digitized the Rivonia dictabelts alone. The recording and editing took place over a 15 month period and totaled about 230 hours of recording. My specific expertise on cylinder reproduction and transfer made an agreement possible between LARHRA and Ina in November 2014, so as to allow the digitization of the Rivonia trial dictabelts to be processed in the best technical conditions. Coordination of the project was carried by Brice Amouroux at Ina, but a key link between our institutions has been Patrick Louvet, expert in the field of rare audio carriers, who also led the digitization quality control.
It is to be noted that among these 591 dictabelts, both blue and red in color, the seven blue ones recorded by Nelson Mandela himself (Statement from the dock, 20 April 1964) had already been digitized in 2001 at the British Library in London. This had been carried out with methods that were both crude and sophisticated, such as using a modified vintage portable Dictabelt player. This was placed on an industrial hotplate in order to smooth out the creases and allow playback with minimal groove-jumping... The purpose here is not to blame the British Library but the fact is that two of those seven dictabelts are now damaged and bear huge scratches with locked grooves which seldom appear anywhere else in the whole collection. Such damage is typical of mishandling on vintage machines and could have been done during uneven attempts made before or after these documents were in the hands of BL agents.

While it appears possible to play a few dictabelts correctly using vintage machines, the reliability is jeopardized as soon as numerous playbacks of sensitive archives are required. Beginning with the make of a solid mandrel made available in 2007 I developed an adjustable diameter mandrel designed to play dictabelts like cylinders on the archéophone phonograph : this was achieved in 2013. A tightness gently added to the jaws of this special mandrel on the whole length of the dictabelt allows for a considerable reduction of the creases or clicking problems, and this without any squashing of the dictabelt and without the need to heat it in order to soften or loosen the vinyl. Consequently the document is not damaged.

As the first listener of the whole set, I recently lived every minute of the Rivonia Trial or at least what was recorded of it : straining my ears on these dialogues in English, checking at each instant the correct progression of the groove, was a unique experience. From some points of view, it was similar to many other trials : while hearing the deep and quiet tone of judge Quartus de Wet (1899-1980) who rarely speaks, compared to the voice of attorney-general Percy Yutar (1911-2002) who is heard at every moment with a specific exaggerated tone crescendo at the very end of each of his questions. Yet this audition was mostly a highly emotional one, discovering each voice in turn, especially the voices of numerous second rank witnesses, some of them being absolutely terrified. On the other hand while listening to the voices of the principal people on trial and their patient answers and statements, one can actually feel how, together, these voices strongly transformed this trial into a tribune for equality against apartheid. For instance one could enumerate the occurrences of such sentences as : "I am not prepared to disclose any of my friends", pronounced by Ahmed Kathrada and by Walter Sisulu and others, just to prove again, with the added force of actual voices this time, the strength and value of the exceptional people there.

There is no final verdict to be heard : despite the fact that these are complete sessions recorded in their continuity - mornings and/or afternoons - on two machines which were appropriately relayed with no loss or blank, the whole trial is not recorded here. The last audio recording was made  on the 18th of May, 1964, a few weeks before the verdict was formally rendered (12th June, 1964). Rivonia's Dictabelts are not stored in their eight albums in a strict chronological order, and the whole collection appears mainly a series of formal questioning. One will not find the opening sessions either : nothing like "oyez ! oyez !" or any other traditional interjection usually launched in order to introduce an opening, but only short microphone tests or what sounds like folding seats or swing doors and noises of chairs moving while everybody stands up. This trial officially began on the 26th November, 1963, but the very first recording dates from the 29th, beginning with an ongoing quashing of indictment procedure or discussion.

Despite the presence of numerous cracks and other imperfections, the entire collection is already quite audible, loud and clear, but it still needs to be restored, this work being done by Vincent Fromont, an audio restorer at Ina. Once done, a copy of the whole audio material will be made available in the future to researchers, students and teachers in all disciplines, for local consultation at the Ina-THEQUE. Of course, South Africa will be at liberty to broadcast and give unrestricted access and visibility to this milestone in its history.

Other articles here (in French).

Nelson Mandela lists the names of heads of state who received him during his African tour as a delegate of the ANC. This exit without a permit from the territory of South Africa was the main reason for the five-year sentence he was already serving during the Rivonia Trial.
To listen

- Defending himself to be a communist, Nelson Mandela says his veneration to the Magna Carta (1215), the Petition of Right (1628), the Bill of Rights (1689), showing his great respect and admiration to the most democratic institutions (20 April 1964).
To listen

- Last words in Nelson Mandela's statement : "During my lifetime I have dedicated myself to this struggle of the African people. I have fought against white domination, and I have fought against black domination. I have cherished the ideal of a democratic and free society in which all persons live together in harmony and with equal opportunities. It is an ideal which I hope to live for and to achieve. But if needs be, it is an ideal for which I am prepared to die." (20 April 1964).
To listen

- Walter Sisulu tells about his travels in Eastern Europe and develops on the role of ANC (20 April 1964).
To listen

- Ahmed Kathrada tells about his travels to Europe and his visit to Auschwitz (26 April 1964).
To listen 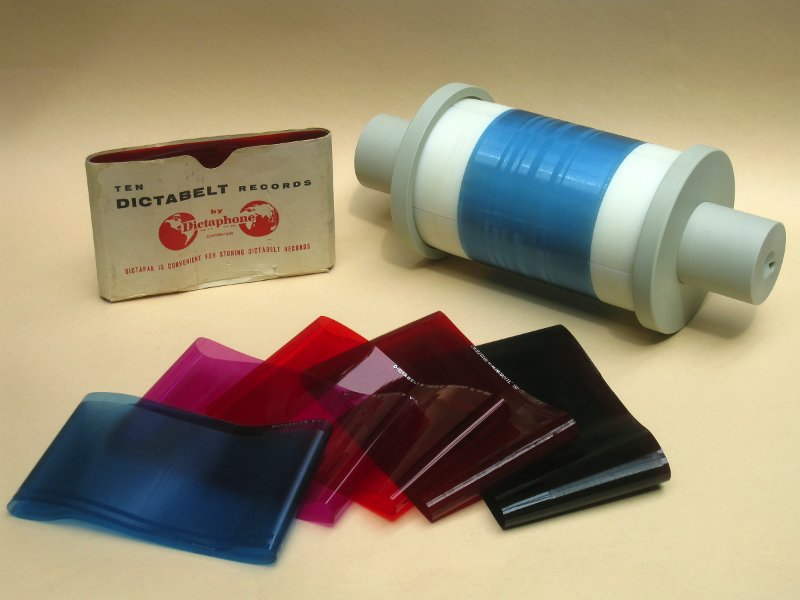 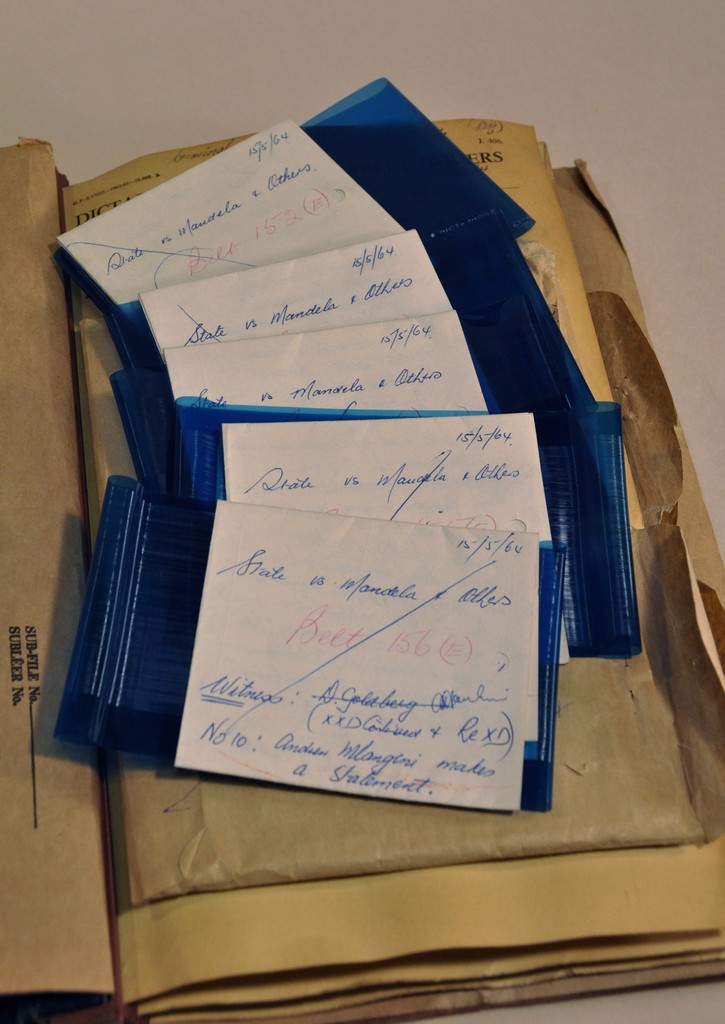 A few Rivonia dictabelts out of their album (photo HC) 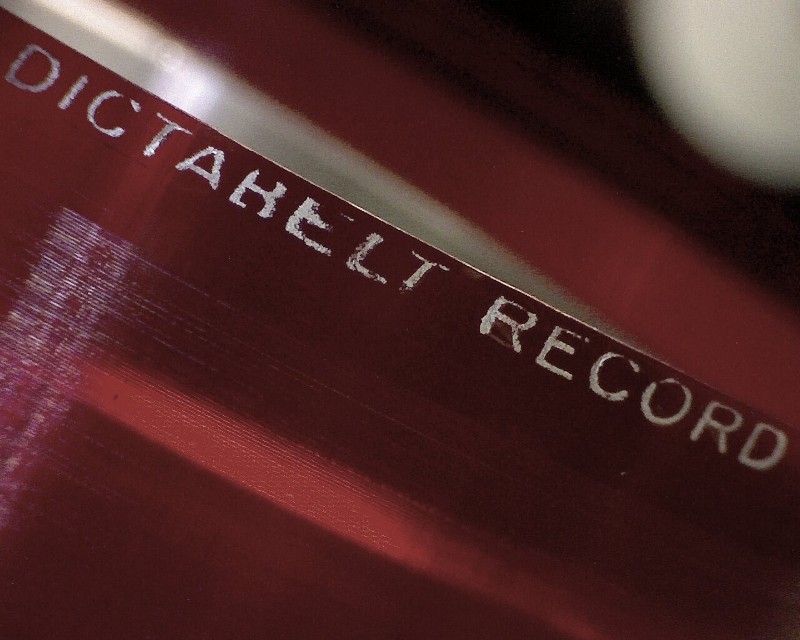 Detail of a red dictabelt of the Rivonia Trial (photo HC) 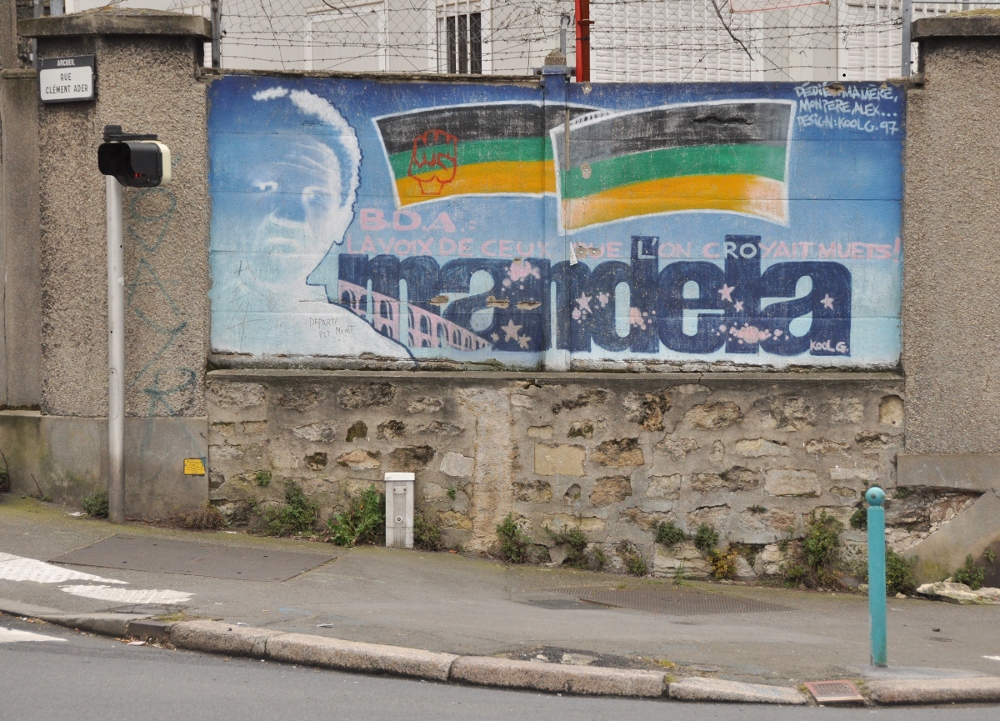 La voix de ceux que l'on croyait muets ! (Mandela, the voice of those who were believed to be speechless), graffiti by KoolG, Arcueil, 1997 (photo HC, 2016).